Several of participants of event have taken the time to describe their presentations and tell us what they gained from the WIP workshop.

During PPIG-WIP, a session entitled ‘Critical Thinking in Research’ was hosted by Marian Petre and Judith Segal (with significant contributions by Thomas Green). A number of the issues raised following the presentations were discussed.

Ann Abraham presented her results from her preliminary study into Sensemaking in Web-based Learning Activities. The Problem Domain was explained; when faced with a new task one needs to search, collect, understand, interpret and make-sense of new information sources to help fill gaps in one’s knowledge.

The study objective was to capture the range of strategies students employed when undertaking research-related information search tasks in web-based environments. Three data collection techniques, including Think aloud during observation, were used; from inductive analysis, five discrete categories of information interaction strategies emerged, namely Search, ‘Evaluation for Selection’, ‘Evaluation for Use’ which has subgroups ‘Evaluation for Utility’ and ‘Evaluation for Personal Fit’ and finally ‘Use/Sensemaking’ category.

The findings re the Search, and ‘Evaluation for Selection’ categories tended to corroborate existing literature, but our attention was drawn to the insight gained into the complex nature of the ‘Evaluation for Use’ and the boundaries between that and the ‘Use/Sensemaking’ category. These two complex groups of strategies are less evident in established Information Seeking and Searching Models.

The results were briefly discussed with reference to ‘making sense’: Ann suggested that results indicated students were ‘sensemaking’ at each stage of the search-evaluate-use process i.e. initially, they appeared to tacitly reference mental models/internal representations for their decision making, but evidence of a switch from tacit to explicit knowledge could be seen when their own external representations of the located information began to emerge during ‘Evaluation for Personal Fit’.

Overall the five discrete categories offer different challenges for interaction design and Ann indicated that ‘Evaluation for Use’ is being considered as the richest environment for further research.

WIP-PPIG 2007 was a friendly, well-organised event which provided a rare opportunity for research students to gain first-hand feedback and encouragement, via formal and informal interactions with experienced Researchers such as Thomas Green. It was good to mix with a group of students whose paths would not necessarily cross, except in a mixed forum such as this.

Whilst my presentation did not generate all the discussion I had hoped for, I gained from general discussions around other presentations and the group session on Friday morning was really useful.

This is the abstract to my paper:

Very little is known about the process by which end-user developers audit and debug spreadsheets. Any research pertaining to the development of spreadsheet debugging methodologies or automated spreadsheet auditing tools would benefit from information on how people actually perform the debugging process in practice.

This paper describes a current ongoing experiment designed to record and analyse the behaviour of industry professionals in the debugging of spreadsheets. The results of this experiment will enhance our understanding of software debugging in general, and the spreadsheet debugging process in particular. To date, the authors have collected and collated the results from 12 participants taking part in the experiment. The experiment involves participants debugging a spreadsheet which has been seeded with errors.

Crucially, a tool has been developed to record the time and detail of all cell selection and cell change actions of individuals when debugging a spreadsheet. More complex spreadsheet activities can also be identified from the resulting data log. These include copy and past, undo typing, redo typing and drag-and-fill. The authors aim is to conduct the experiment with up 20 industry professionals. Recently, the opportunity has arisen for the experiment to be conducted with between 50 and 80 final year accounting and finance degree students.

The event was very insightful. Most significantly, the comments and feedback were much appreciated and very helpful. Also, the interest shown in the research we are undertaking has given renewed vigour to our endeavours. There was a good social aspect to the event: meeting fellow postgraduate researchers and enjoying a night out in Manchester. All in all, a well organised, informative and enjoyable workshop!

My current work lies on the periphery of psychology of programming topics but there are connections between the issue of accessibility (making computer applications and services available to users of all abilities and ages) and programming. My presentation explores some of these connections.

Accessibility is an issue of increasing importance to software developers and engineers due to strengthening legislation. I began by outlining what accessibility is and the various legislative frameworks. I then presented a small number of international accessibility standards and initiatives.

The third section establishes the link between accessible software and programming:

I consider how and whether existing software tools provide adequate accessible support, consider the programming idea of unobtrusive Javascript and whether it could make web programming more difficult since may become spread over different files and consider whether the current accessibility APIs are as effective as they could be.

By studying the topic of accessibility we are forced to consider how different modalities are used whilst programmers work with and construct software. By studying the ways in which we can support all communities of programmers we may in turn learn more about the cognitive issues that all programmers face.

I came away from the workshop with pointers to subjects and armed with a whole range of questions that I have not forgotten about. Since the workshop I have made some progress with understanding accessibility APIs and how they work, but I still have a long way to go before I have anything to write up!

For my talk I continued my story from PPIG'06 and talked about where my research is going. I am working with a company which produces mobile applications and am looking at their software development processes and the impact they have on social communication. As part of this we are looking at implementing certain practices from agile software development. The aspect that I presented was the issues that we had had with implementing ‘information radiators’ (tracking project progress through the use of index cards chart systems) in the company as part of an informative workspace environment.

Sadly, due to time considerations I had to cut myself and the following discussion a bit short. However, I learned that most people find feedback devices and active build monitors in the workplace (especially Nabaztag rabbits) quite interesting. I also noted the common reservations people have about lumping research under an ‘agile’ banner. 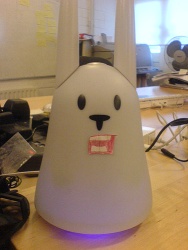 A photograph of a Nabaztag rabbit

The workshop itself was wonderful, interesting and beautifully organised. I have much to go away and think about now, not just from my talk but also the other talks and from the good session run by Thomas Green, Judith Segal and Marian Petre on Critical Thinking in Research.

Firstly, I won the Rose Elliot Prize for Time Control (photo attached), after successfully editing my talk down to 15 minutes. This prize made me inordinately happy as, well, er, I have never, ever, been known for my time-keeping skills. 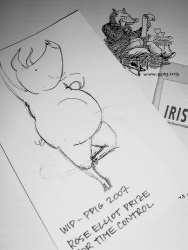 A photograph of my time keeping prize

Secondly, my name was drawn to receive funding from PPIG to go to Finland for PPIG'07. This was brilliant for me, as I had not been sure I could afford to attend. This may not be so good for everyone else as it means I shall try to continue telling people my research story (and people may become bored of this after a while!) I just hope that everyone else from the workshop at Salford will be able to join me there.

I reported a study with 31 teams of developers, which was done as a part of research for my PhD. The study was conducted in order to determine the effect of different kinds of knowledge and participation on the results of a development process. In a quasi-experimental design, the independent variable was kind of knowledge and participation, varied according to three levels; to this end, developers were confronted with a technical system and its users in varying ways. The dependent variable was the kind of system developed. Almost no effects could be detected.

The discussion at the workshop focused on possible reasons for lacking effects of the introduced manipulation. A reason several participants agreed on was a ceiling effect. Furthermore, Prof. Thomas Green conveyed helpful ideas regarding an application of the Cognitive Dimensions framework to my research. This approach will be pursued further. Finally, I greatly appreciated receiving the “WIP-PPIG Prize for Workmanship”.

I presented my doctoral research which is aimed at investigating how novices understand object-oriented terms like ‘class’, ‘object’ and ‘part-of’. The study is conducted as a phenomenographic study, utilizing qualitative interviews as the primary empirical data. The study will be used to hypothesise about the process of learning programming at a higher educational institution.

My paper focussed upon the issue of trust within e-commerce and the applicability of cognitive dimensions framework of uncovering insights into this. The paper formed part of PhD that I had just begun and the workshop itself proved to be incredibly helpful, and also gave me an opportunity to see the inner workings of academia.

Having never been or presented at a workshop before I was largely unsure of the processes involved. Overall, I gained a huge the amount of information and direction from simply having one to one, and large discussions with the group. It did exactly what it said on the tin.

Work Summary: Many people believe that access to digital content (e.g., medical, financial, and student records) should be restricted according to some set of policies. Towards this end, several languages have been developed so that, if people write their policies in one of the languages, then machines can determine which accesses are allowed; that is, machines can enforce the policies. The goal of my project with Moritz Becker is to evaluate the usability of some of the languages. My goal for WIP-PPIG was to get a better idea of how to do this.

What did I learn at the workshop? I learned that usability studies are even more work than I imagined, and that applying the cognitive dimensions framework is probably a better first step. In addition to what I learned, the talks gave me food for thought. I truly enjoyed all of them. It’s two weeks later and I’m still thinking about what could be done to help programmers with physical disabilities, how trust can be fostered in cyberspace, and whether Agile concepts can be applied to learning and using policy languages.

Most importantly, I think about the ways in which the people at the workshop fostered a sense of community. At some level, I suspect the keys are humility, a sense of wonder, and a focus on the good that each person brings to the table. Hopefully, I’ll remember that for a very long time.